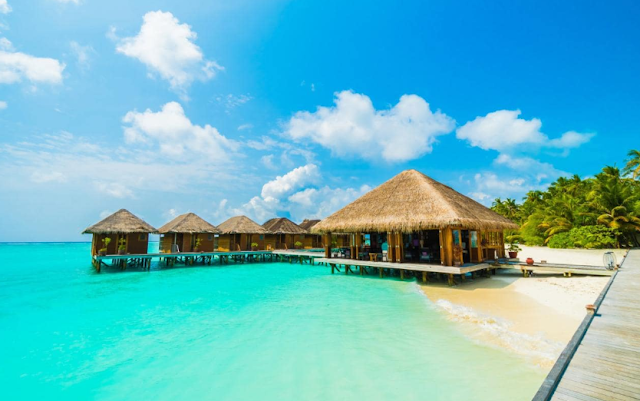 Left to the mercy of the soft and lapping the Indian Ocean, the islands of the Maldives have been sculpted and formed into unquestionably one of the most quintessentially beautiful tropical places on the globe.
Ranging from the powdered beaches of the northern atolls to the earthy sea shacks and fishing hamlets of the southern isles, the whole nation can be found strewn across the turquoise waters some way from the Indian subcontinent.
Most visitors will land in the throbbing, pulsing city of Male, packed onto its own pinprick of an isle and boasting spice-scented markets and great mosques.
Most also don’t linger long before they hit the seaplanes or boats and make for the shimmering private bays of their chosen resort, where infinity pools and over-water cabanas are the norms.
More recently, new local guesthouses and the discovery of rolling waves have begun transforming the Maldives from honeymoon hotspot to surfing, adventure and backpacking destination – paradise is now open to all, it seems.
Let's explore the best places to visit in the Maldives: 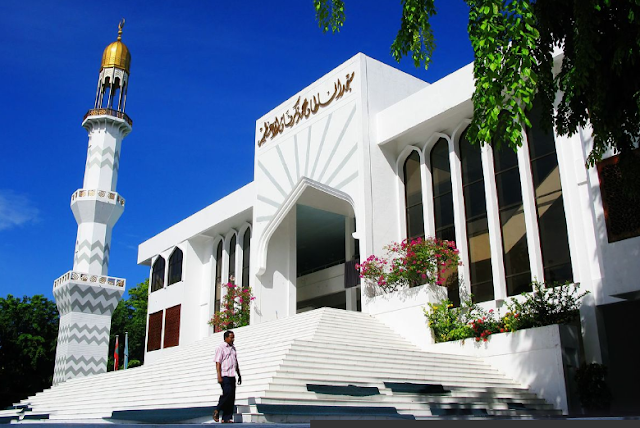 Thrumming with scooters and cars and Indian bazaars stacked with coconuts and spice, the city of Male – the capital of the Maldives atolls – has the frenetic feel of a place crammed into a slot that’s too small for it.
And that’s because it is.
Although rarely visited (most travelers bypass the city on seaplanes heading straight for their resort), the town is crammed onto a pint-sized islet in the North Male Atoll.
It manages to fit some fascinating sights between its streets though, like the 17th-century Friday Mosque and the gold-tipped Islamic Centre.
Male Market is another must – just be sure get your haggling skills up to scratch. 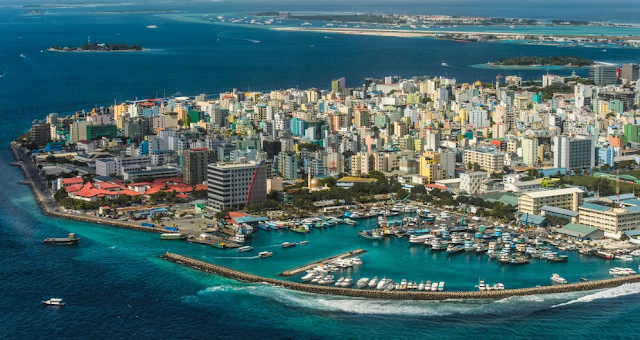 Sat just across the sparkling waters from the capital of Male, the island of Hulhumale is forever growing and growing as more and more land is reclaimed to house the sprawling urban tendrils of the city.
It’s also the home of the Velana International Airport, which is the main gateway to these paradisiacal islands for most.
However, don’t be put off by how all that sounds – Hulhumale is actually a charming place.
It’s got a gorgeous – if artificial – beach on its eastern haunch, a clutch of leafy neighborhoods, a glass-topped mosque, and planned promenade walkways above the Indian Ocean. 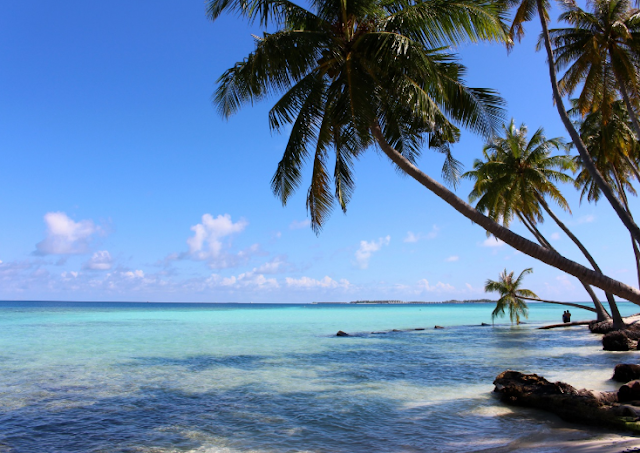 Maafushi might not have the sprawling luxury resorts and opulent 5-star hotels that many of its nearby brothers do, but it’s got plenty of charm.
Sadly ravaged in the 2004 Indian Ocean Tsunami, the place has been busy rebuilding its salt-washed fishing jetties and industrious sailor huts in the last decade.
Something that’s helped is the opening up of rights to local guesthouses, which is transforming Maafushi into one of the top off-beat island getaways for budget travelers.
Of course, you can expect gorgeous beaches backed with palms, lapping waves, and a clutch of homey little coffee shops on the shore. 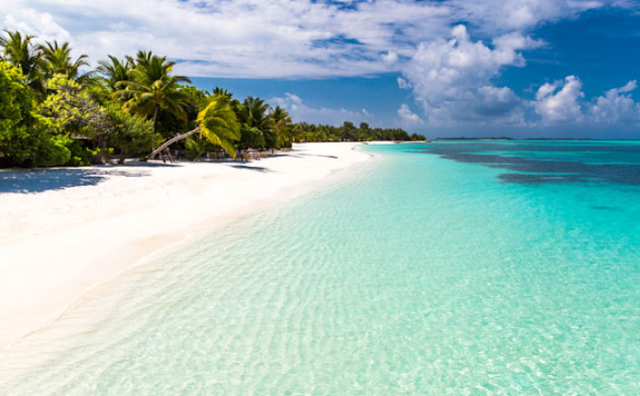 Utheemu
Sat on the far northern reaches of the Haa Alif Atoll, itself the northernmost of all the Maldivian island chains, the beautiful site of Utheemu holds a special place in the history of this archipelago nation.
That’s because it was once the home of the revered Sultan Mohamed Thakurufaanu – the leader who’s credited with driving out Portuguese invaders from the isles in the late 16th century.
Of course, there are the usual sparkling white sands and lapping Indian Ocean waves, but these are punctuated by heritage sites like the Utheemu Ganduvaru, which is the gorgeous timber-built palace where the respected leader grew up. 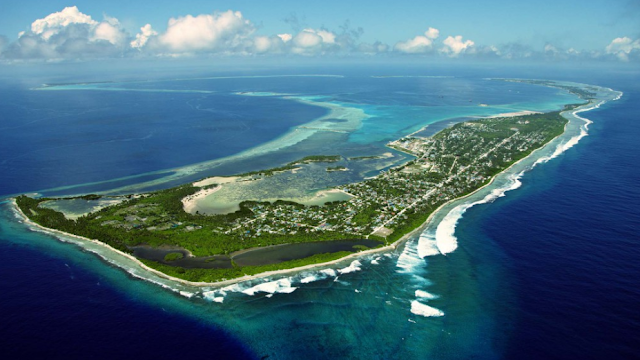 Feydhoo
Feydhoo’s story is a curious one.
In the 19th century, the people now living between the leafy streets and tight-knit housing blocks here were the inhabitants of nearby Gan island (more on that one later). When the British came in the run-up to WWII, Gan was transformed into an airbase, and the locals were shipped out to live on the next island along in the Seenu Atoll.
That was Feydhoo, which is today a pretty picture of lived-in Maldivian life.
Come and stroll the winding walkways and sample seafood curries with the locals – the welcome is always warm. 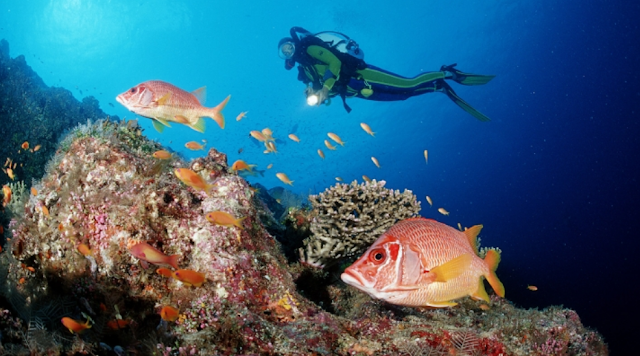 Maradhoo
Joined at the hip to aforementioned Feydhoo by a seaside causeway that runs just above the coral-fringed shores of the Seenu Atoll, Maradhoo is a major link in the island chain that starts with Gan to the east.
Long and thin, it juts out into the Indian Ocean like a finger fringed with narrow beachfront and swaying groves of coconut palms.
As in Feydhoo, the locals are laid-back and lovely, and the cuisine is spicy and rich in seafood.
Be sure to take a walk down Link Road and flit between the coffee shops and sandwich vendors that meet between the palm trees there. 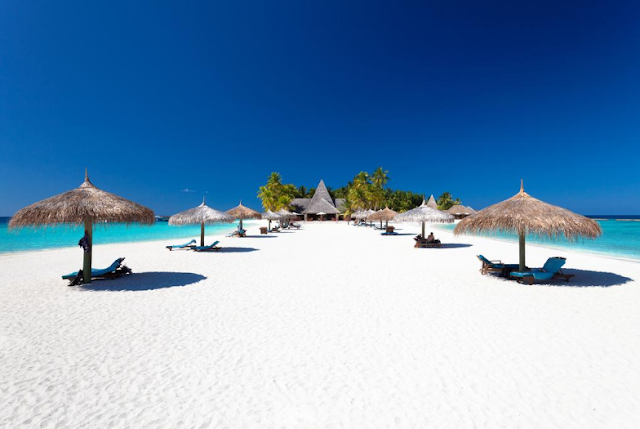 Veligandu Island
Romantic sunsets glow red and yellow over the lapping waters of the Indian Ocean; cocktails clink in the resort’s luxurious bar; sea kayaks bob on the turquoise shoreline, and crystal-clear waves roll in softly from the inland lagoon.
Welcome to uber-beautiful Veligandu Island, which has long been championed as one of the top destinations in the Maldives for couples.
Honeymooners and newly-weds are a common site on this long, thin finger of land on the western edge of the North Ari Atoll, and there are plenty of opulent seaside villas and suites to match. 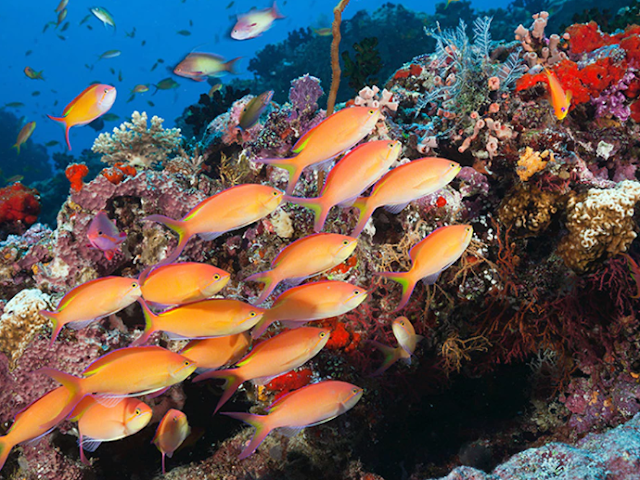 Banana Reef
Many travelers heading to the islands of the Maldives will be coming for one thing and one thing only: diving.
And there’s hardly a single better place to don the SCUBA gear and wetsuits in the country than at the Banana Reef.
This fruit-shaped dash of multi-colored corals and seaweed-clad sandbanks lies underwater between the isles of the North Male Atoll.
It’s served by countless outfitters, who lead excursions to uncover the striped snappers and bulbous sponges, the reef sharks and the barracudas that all coalesce here. 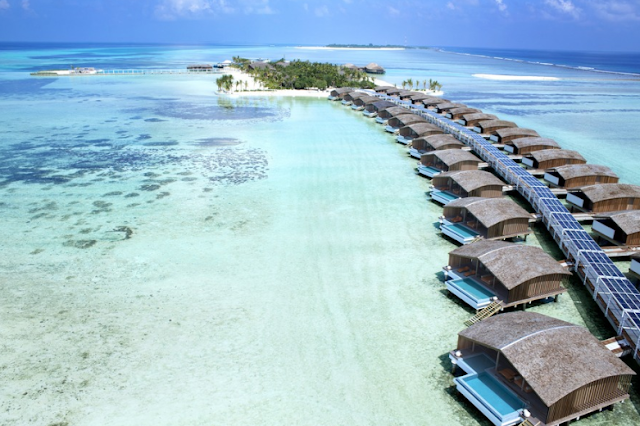 Thulusdhoo Island
It’s the spirit of the salt-washed Caribbean that seems to drive Thulusdhoo Island.
Largely undiscovered, this speck in the Male Atolls is ringed by wide spaces of sand from which bulbous coconut trunks sprout by the hundred.
The beaches are – naturally – great, and the locals love to draw in their fading fishing boats to flint up a good sizzling seafood barbeque now and then.
That all fits perfectly with the other pastime of travelers on Thulusdhoo: surfing.
Look for the fun left-hand rollers that turn into barrels off of Villingilimathi Huraa close by. 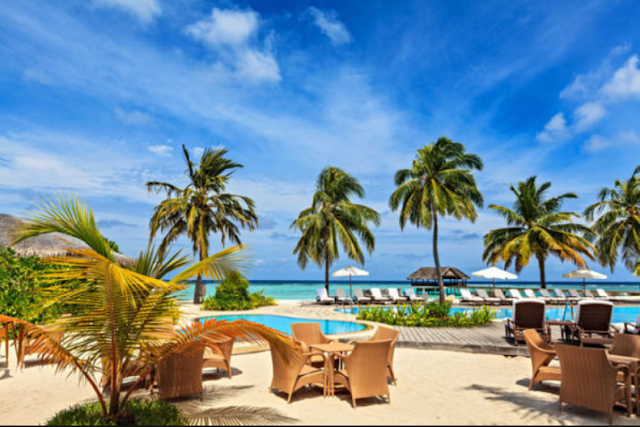 Fuvahmulah
Fuvahmulah promises something a little different to the rest of the Maldivian atolls.
For starters, this speck on the map of the Indian Ocean doesn’t really have any near neighbors, and it occupies an atoll all of its own.
It’s also peppered with the occasional inland lake, which is a rare sight to see in this flat-lying country.
Meanwhile, the sandbanks that ring popular Banging Beach make for some crashing rollers and refreshing salt-spray (a break from the usual relaxing lapping lagoons), and the proximity to the Earth’s equator means steamy weather throughout the year. 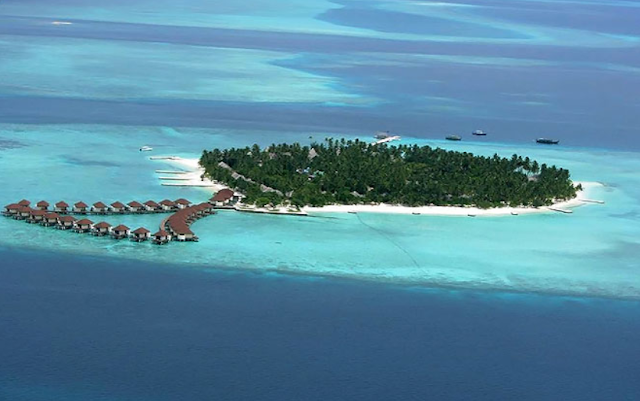 Alimatha Island
Perched on the eastern edge of the Maldives, in the famous Felidhe Atoll, Alimatha is a great tourist island that offers luxury cabanas, untouched stretches of pristine sandy beach, and – most importantly – some of the most celebrated SCUBA diving spots around.
The resort that covers the island can often be seen packed with eager drivers, who all come to seek out the pretty coral groves and sea walls that surround the shores.
These are packed with jackfish, morays, and eels, and are known for their high visibility and popular night diving packages. 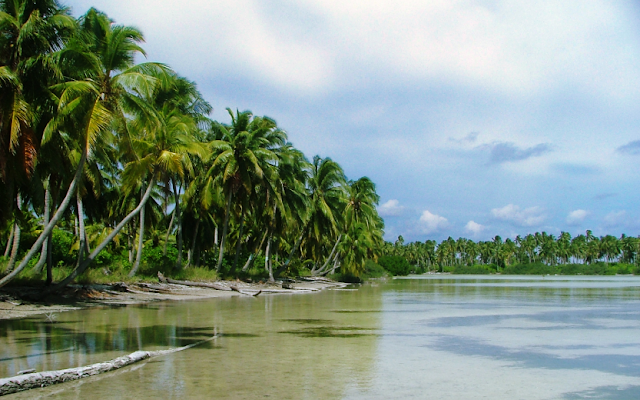 Hithadhoo
Large (at least for a Maldivian island) and highly-populated (again, at least for a Maldivian island), this sub-section of Addu City in the old Seenu Atoll can be reached on the same causeways that connect Gan to Maradhoo.
On its southern edge, the place is given away to mangroves and marshes and shrubland, while the north side of the island is packed with cafes and bakeries and the occasional set of looming minarets that rise from the local mosques.
More than anything, Hithadhoo oozes a charming lived-in vibe; one that’s difficult to discover elsewhere in the resort-heavy country. 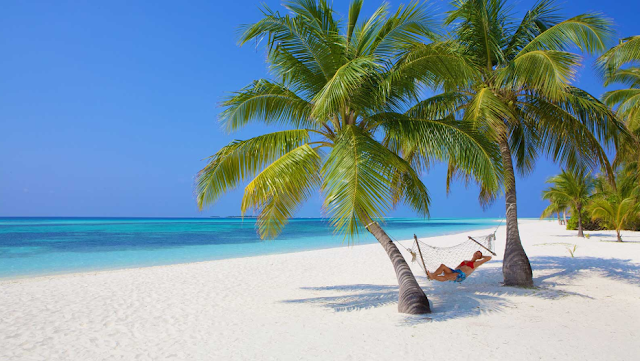 Kuredu
Kuredu is the self-proclaimed jewel of the Lhaviyani Atoll, which makes its home in the central-north reaches of the Maldivian archipelago.
A boomerang-shaped isle, it’s entirely covered by a single resort, which offers rustic bamboo shacks and rows of those ubiquitous over-water bungalows with verandahs above the waves.
The whole place is completely surrounded by its own private fringing of powdery sand and is considered one of the most advanced SCUBA and snorkeling destinations in the country – strong currents and high waves often make it difficult to see the manta rays and tropical schools.
Unusually, Kuredu also plays host to a full 9-hole golf course. 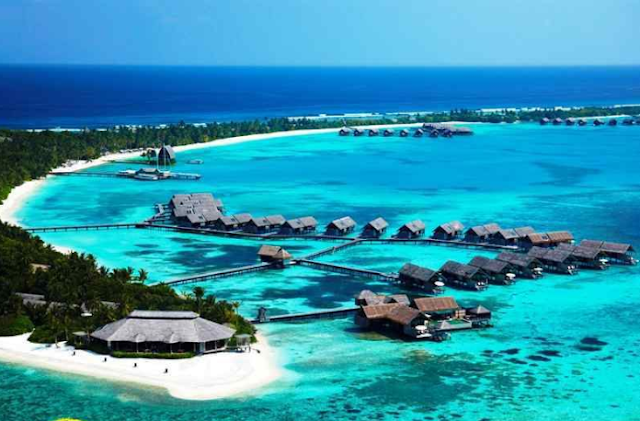 Gan
Gan is primarily known for its airport, which is the second-largest airport in the entire Maldives and a famous former airbase for the British Royal Air Force during WWII. Today, the island has shed its old military importance in favor of tourism, and it’s slowly rising to become one of the most popular spots in the Addu Atoll.
It’s not just the accessibility (thanks to the airport) that draws the crowds either because Gan has earthy little fishing restaurants and small stretches of shimmering sand that are usually totally empty of visitors. Nice. 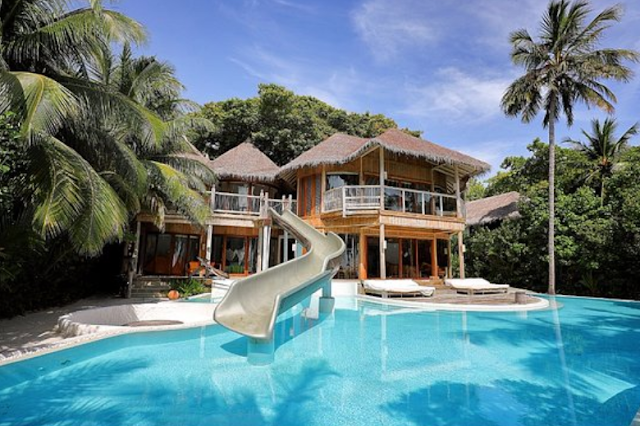 Kunfunadhoo Island
If you’re after the fabled luxury and romance of the Maldives, then it’s likely that the opulent resort on Kunfunadhoo Island won’t disappoint – it’s continually hailed as the most indulgent place to stay in the country.
Visitors enter through a thatched timber great hall that hides between groves of coconut palms.
From there, it’s onto the cocktail decks that soar on stilts above the jungle, or out to the beaches where candles flicker in the sultry sea breeze.
Add in a couple of infinity pools, swim-up bars, and the chance to dine on a private little sandbank with only the Indian Ocean waves as a backing track, and it’s easy to see why this one’s so popular!
Shares
NEXT ARTICLE Next Post
PREVIOUS ARTICLE Previous Post
NEXT ARTICLE Next Post
PREVIOUS ARTICLE Previous Post