Most Beautiful 10 Places in Thailand

Most Beautiful 10 Places in Thailand 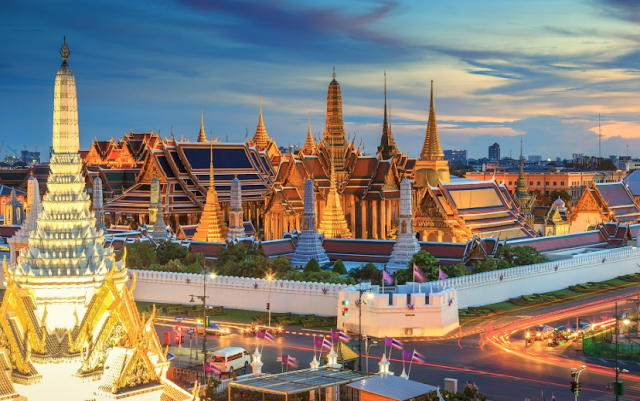 One of the most popular tourist destinations in Southeast Asia, Thailand is a country with a fascinating history, a devout Buddhist culture and beautiful scenery that lures travelers from all over the world.

For many cultural travelers, it is a land of ancient temples, glittering spires, and beautiful palaces. For sun-seeking hedonists, it is a place to rejuvenate on palm-studded beaches that rim idyllic bays and islands. For international foodies, it is a culinary mecca whose restaurants and sidewalk food stands keep coming back for more

Bangkok, a huge metropolis replete with traffic and shopping centers worthy of any international capital, contrasts sharply with the rice paddies out on the plains, the idyllic villages in the hills and mountains or the beach-side reggae bars in Phuket. But it’s this very diversity that makes the country so appealing for so many, from burned-out executives who jet here to unwind at sybaritic five-star resorts, to backpackers who wander through to experience the local culture while staying at low-cost guesthouses in Bohemian-like Chiang Mai.

Below is a listing of the “Top 10” most-visited places in Thailand as reported by the Tourism Authority of Thailand. 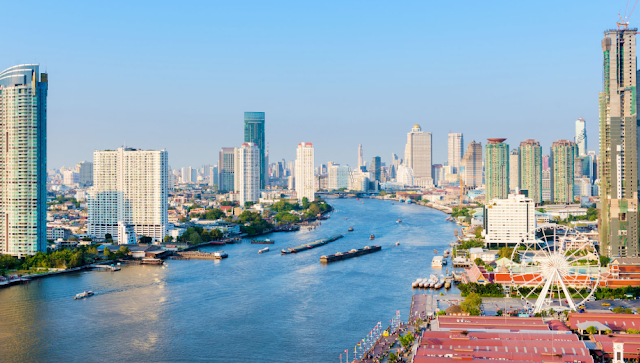 As the political, economic, cultural, culinary, and spiritual capital of Thailand, Bangkok features both old-world charm and modern convenience. Invariably, every Thailand holiday includes a visit to the kingdom’s capital city, Bangkok, or Krung Thep, “the city of angels” as it’s known to the locals. Many first-time visitors to the city are overwhelmed by its sheer size; others by the vast number of attractions scattered about the city, the result of more than two centuries of rapid development following the city’s founding in 1782. Today Bangkok is a cosmopolitan, 21st-century city of more than ten million inhabitants. 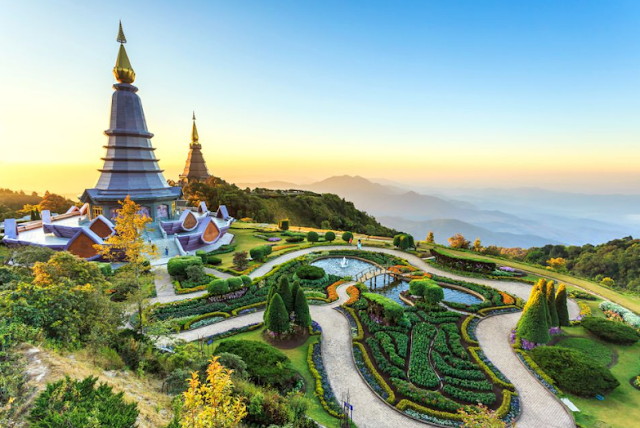 Thailand’s “Rose of the North” contains both cultural and natural diversity, a multitude of attractions, and welcoming hospitality. Chiang Mai literally means “new city” and has retained the name despite celebrating its 700th anniversary in 1996. King Meng Rai the Great, a very religious leader who founded many of the city’s temples, created the city as the capital of the Lanna Kingdom around the same time as the establishment of the Sukhothai Kingdom. Chiang Mai not only became the capital and cultural core of the Lanna Kingdom, but also the center of Buddhism in northern Thailand. 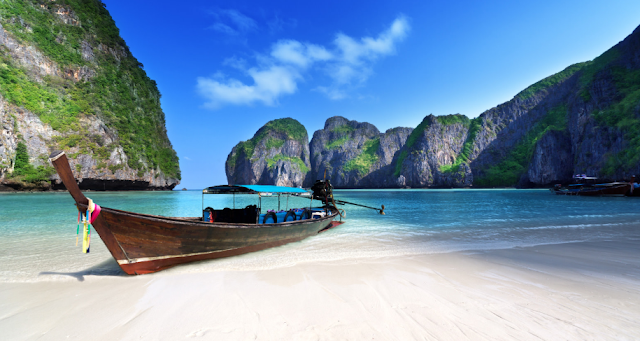 When travelers to Thailand talk about sea, sun, and sand, Phuket is often the first place that comes to mind. Catapulted to international attention by the James Bond movie “The Man with the Golden Gun” back in 1974, the entire area today boasts many hotels and resorts, which offer all sorts of tourism facilities for travelers.

Once considered the most spectacular city on Earth, the ruins of the capital of the Kingdom Ayutthaya are now a major tourist attraction easily accessible from Bangkok by car, train, or boat as either a day trip or overnight excursion. A regional power for 417 years, the ancient city its apex in the 16th century, when the Kingdom’s territory extended into and beyond present-day Laos, Cambodia, and Myanmar. Ayutthaya had diplomatic relations with Louis XIV of France and was courted by Dutch, Portuguese, English, Chinese and Japanese merchants. 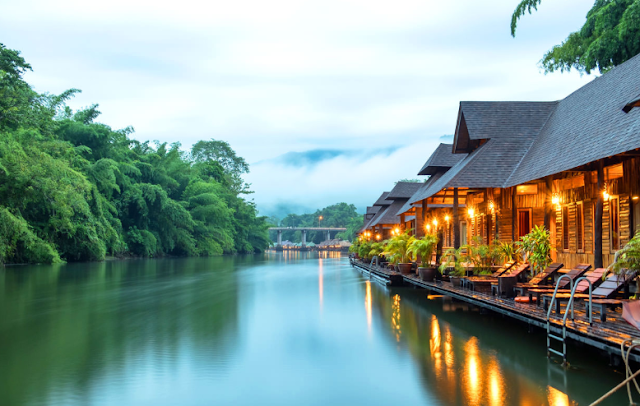 Kanchanaburi has become a major tourist destination, with a focus on the outdoors due to its magnificent landscape and charming beauty. Only two hours from Bangkok, Kanchanaburi is accessible by road or rail and is popular for fishing, rafting, canoeing, mountain biking, bird-watching, star-gazing, golfing and elephant and jungle trekking. The area boasts several well-known waterfalls, caves that were once inhabited by Neolithic man, national parks, tranquil rivers, virgin forests, and several large reservoirs.

A province on southern Thailand’s Andaman coast is an almost otherworldly region of labyrinthine archipelagos, where islands seem to erupt vertically out of the sea and secluded beaches are only accessible by colorfully adorned long tail boats. Krabi’s myriad of bays and coves have sheltered pirates, merchants, and sea gypsies for thousands of years and archaeological evidence indicate that Krabi was originally inhabited as early as 25,000 – 35,000 years ago. 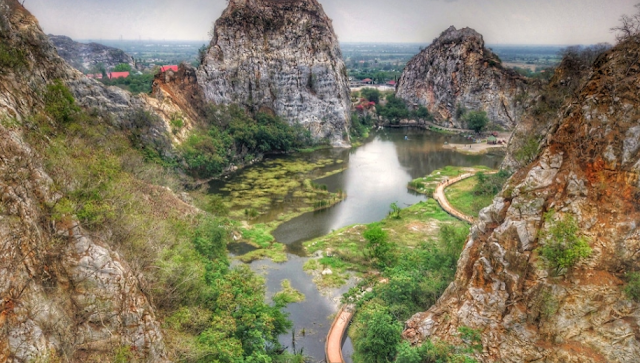 Ratchaburi’s premier attraction is the Damnoen Saduak Floating Market, a destination visited by a large percentage of tourists who visit Bangkok. Vendors in the market sell their wares by paddling boats along Ratchaburi’s canals. Every morning, hundreds of boats crowd the market, paddled by women in straw hats. For a few hundred baht visitors can hire their own boats and explore the canals while shopping for everything from vegetables and fruits to freshly-cooked noodles and souvenirs. 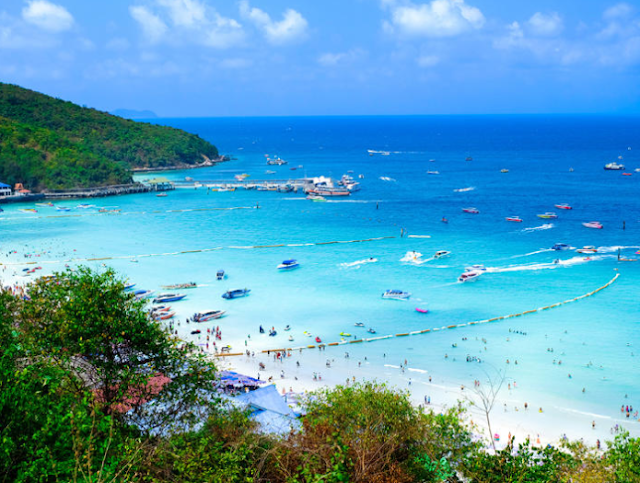 Chonburi, Bangkok’s nearest seaside town, is located on the eastern coast of the Gulf of Thailand, about 50 miles from the capital. The area boasts abundant natural resources, making it a popular coastal province among Bangkokians who seek a weekend. Particularly popular is the seaside resort of Pattaya, though Chonburi’s smaller, quieter seaside towns are also quite popular with foreigners and Thais alike.

Founded in the 13th century, Sukhothai, which literally means “Dawn of Happiness”, was the first truly independent Thai Kingdom and enjoyed a golden age under King Ramkhamhaeng, who is credited with creating the Thai alphabet. The superb temples and monuments of this great city have been lovingly restored, and Sukhothai Historical Park, a UNESCO World Heritage Site, is popular with travelers, particularly on those occasional nights the park when the park remains open and the graceful Buddhas are illuminated by lights. 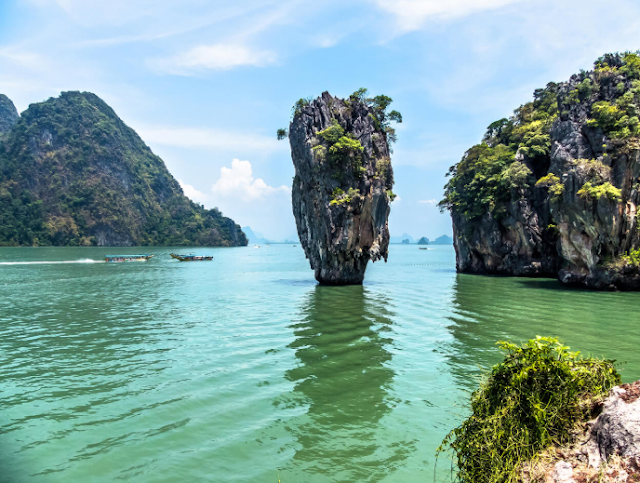